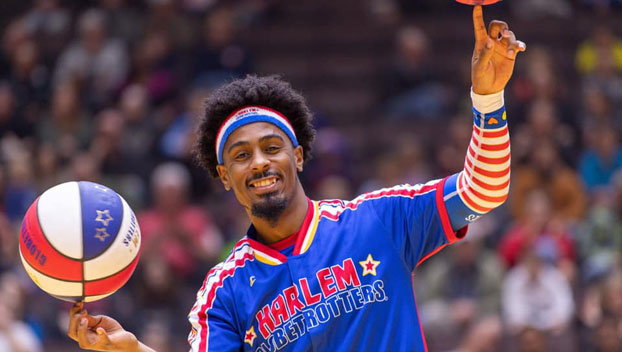 Spending a lot of the day playing basketball is nothing new for Russellville native Siran Winston, but the quarantine has caused the Harlem Globetrotter to shift his focus toward a new challenge: breaking Guinness World Records.

Winston, a 2008 Russellville High School graduate, said he saw videos on YouTube of players trying to break basketball records and thought it was perfect to incorporate into his workouts.

“With the Globetrotters, we shoot a lot of 4-pointers, so I have to work at making these shots anyway,” Winston said. “So when I saw there were records for them, I thought it would be fun to see if I could break them.”

Winston said he has applied for the chance to break both, but the application process has been more time consuming than he expected.

“The process is really long because you have to apply for it through Guinness,” Winston said. “They have to approve your application, and then they have to send someone out. You also have to have so many cameras, referees and additional witnesses.”

Winston garnered attention from several national sports sites, such as Sports Illustrated, for a video he posted in which he made eight consecutive half-court shots to beat the current world record.

“That didn’t count as the world record because I didn’t know all of the rules for it, but it helps to know that I can do it,” Winston said. “Now I am just getting to where I can do it consistently.”

Winston said he hopes to hear back soon about setting up a time to attempt to officially break the world records.

Russellville Parks and Recreation director Donnie Flanagan said he is not surprised to see Winston accomplishing great things in life because of his work ethic.

“I have seen Siran play since he was a little kid, and he has always worked so hard,” Flanagan said.

Flanagan said he is proud to say Winston is from Russellville and have him serve as an inspiration to local young people.

“Maybe there is a kid here who will grow up watching him and decide they want to be like him,” Flanagan. “He shows kids that if they work hard, anything is possible.”